WHAT YOU NEED TO KNOW ABOUT ADEWALE ADEYEMO, THE NEWLY NOMINATED DEPUTY TREASURY SECRETARY OF THE UNITED STATES 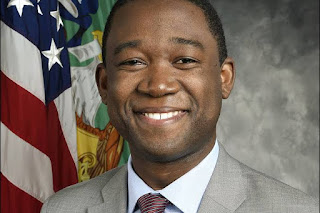 Adewale Adeyemo
The United States President-Elect, Joe Biden yesterday announced Adewale ("Wally") Adeyemo, a Nigerian born American Attorney and an illustrious Yoruba son from Ipetumodu in Ife North Local Government Area of Osun State as the Deputy Secretary of the Treasury alongside other key members of the economic team that will work with him in the next 46th US presidency.
Adewale Adeyemo is the first and the current President of the post Obama-Biden's presidency non-profit organization, the Obama Foundation, a position he has held since August, 2019. Prior to his attaining this post and specifically during the Obama administration, Adeyemo served as the President's senior international economic adviser and Deputy National Security Advisor.
Mr. Adewale also served as the Deputy Director of the National Economic Council, the first Chief of Staff of the Consumer Financial Protection Bureau and Deputy Chief of Staff of the Department of the Treasury.
In a press release published on the Biden-Harris Transition official website: buildbackbetter.org,  Biden expressed confidence in the new economic team to bring stability to the nation's economy, fashion out a relief roadmap for Covid-19 most affected communities and solve other systemic social issues currently facing the country.
"As we get to work to control the virus, this is the team that will deliver immediate economic relief for the American people during this economic crisis and help us build our economy back better than ever. This team is comprised of respected and tested groundbreaking public servants who will help the communities hardest hit by COVID-19 and address the structural inequalities in our economy", he said.
Adeyemo holds a Bachelor of Arts degree B.A from the University of California, Berkeley and had his J.D in Legal Education from the Yale Law School.
If confirmed by the Senate, the 39 Years Old Adeyemo will make history as the first African-American Deputy Secretary of the US Treasury, the highest position ever held by a Nigerian-American in the history of the United States.
Breaking News Foreign Briefing
IFE CITY BLOG
Stay With Us For Top-Notch Community Reports, City Infotainment And Breaking News From Across Borders. Follow Us On Social Media For More. For Your Adverts Placement And Publications, Please Call/WhatsApp: 08141665947 Or Send a Mail to [email protected]