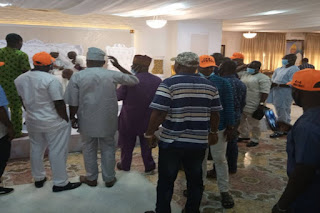 His Excellency, Governor Isiaq Adegboyega Oyetola, the Executive Governor of the State of Osun recently announced the Construction of an Ultramodern Stadium, the reconstruction of 2.4km road linking Iloro to Aganun and renovation of the New Market (Oja Tuntun) which was engulfed by an inferno few months ago in Ile Ife.

This decision was made at the last State Executive Council meeting where the duo of Hon. Remi Omowaye, the Honourable Commissioner for Works & Transportation and Hon. Jamiu Babatunde Olawumi, the Hon. Special Adviser to the Governor on Education were to represent the Governor on the visit to His Imperial  Majesty, Ooni Adeyeye Enitan Babatunde Akande Ogunwusi, Ojaja II.

The appointment to visit and inform the Arole Oduduwa about the anticipated developmental projects was done by Hon. Olawumi, a son of the soil, was done as a matter of exigency.

The entourage were received at Ile Oodua, the Palace of Ooni of Ife with the introduction of Guests and the Palace Chiefs, the usual practice accordingly.

Hon. Remi Omowaye, the Honourable Commissioner for Works and Transportation in his opening address delivered the message of the Governor to the good people of Ile Ife and intimate them about the developmental projects that will be embarked on by the State Government in no time.

Ooni Ogunwusi, the spiritual father of the Yoruba race who also doubles as the Co-Chairman National Traditional Regulatory Council of Nigeria (NTRCN) in his response thanked His Excellency, Governor Gboyega Oyetola for his unwaivery magnanimous support for Ile Ife since the beginning of his administration and he equally expressed satisfaction in some of the Governor's laudable giant strides.

The Arole Oduduwa gave a nod and an immediate approval to the construction of the proposed Stadium while his Director of Media & Public Affairs, Com. 'Yera Moses Olafare was asked to lead the team in search of the most suitable location for the monumental edifice to be built within Ile Ife.

The foremost monarch promised an unflinching support to His Excellency and encourage him to continue his developmental programs and all inclusive people oriented policies.

While addressing the other political appointees from Ifeland, Ooni Ogunwusi singled out Hon. Jamiu Babatunde Olawumi for his commitment, diligence and uncompromising efforts to the course of the ancient city.

His Majesty used the medium to showcase him as a rare Ambassador and a good representative of Ifeland having seen his unequalled strategic performances and also reinstate the hope of the people of the land for having him in the cabinet of Governor Gboyega Oyetola.

In his statement, Ooni Ogunwusi described "Hon. Jamiu Babatunde Olawumi as a very gentle and responsible man who is passionate about the development of Ile Ife.

A politician of high repute, worthy of emulation" he concluded.

His Imperial Majesty gave the royal blessings from the sacred throne of Oduduwa and he reassured the total supports of all the Ifes towards the administration of His Excellency, Gov. Gboyega Oyetola.

He admonished the Governor's sincerity and his proactiveness in all matters relating to the Security of lifes and properties in Osun state.

Ooni Ogunwusi concluded that, it's important for all the Party Members within the APC fold to support the Governor and his administration wholeheartedly.

Also in attendance were the immediate past Chairmen, Hon. 'Yera Elugbaju and Hon. Olubisi Oladosu of Ife Central LG and Ife Central West LCDA respectively including other notable members of All Progressive Congress in Ifeland.

The visit ended with an aroused reception.

City News Community Reports Gists From The House of Oduduwa Politics
IFE CITY BLOG
Stay With Us For Top-Notch Community Reports, City Infotainment And Breaking News From Across Borders. Follow Us On Social Media For More. For Your Adverts Placement And Publications, Please Call/WhatsApp: 08141665947 Or Send a Mail to [email protected]