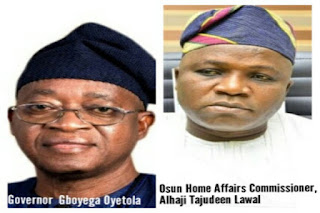 The Osun State Commissioner for Home Affairs, Alhaji Tajudeen Olaniyi Eniafe Lawal has felicitated with the state Governor, Alhaji Isiaq Gboyega Oyetola in marking the Governor's two years in office, today 27th of November, 2020.
In a cogratulatory message obtained from his Media Aide, Musefiu Kolawole Afolabi, Prof.  KCIO3 as popularly known, the Ife born commissioner described Governor Oyetola's two years in office as a "GLAMOROUS 24 MONTHS OF SERVICE YO THE PEOPLE".
He described Governor Oyetola as God-fearing, Meticulous and a listening Governor which according to the commissioner, makes him the best choice the osun people could ever have made, while praying to God to endow the Governor with more inspiration, guidance and divine wisdom to make Osun State an ecosystem of his dream.
Alhaji Eniafe encouraged the people of osun to continue to  discharge their constitutional obligations as citizens for the sustenance of the dividends of democracy currently being enjoyed in the state.
He urged the Osun people to see Governor Oyetola's performance so far as only a tip of the iceberg, enjoining them to expect better days ahead in the second half of the Governor's tenure.
City News Politics State News
Location: Osun, Nigeria
IFE CITY BLOG
Stay With Us For Top-Notch Community Reports, City Infotainment And Breaking News From Across Borders. Follow Us On Social Media For More. For Your Adverts Placement And Publications, Please Call/WhatsApp: 08141665947 Or Send a Mail to [email protected]