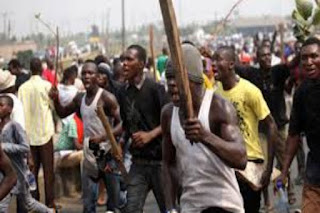 Violence rocked some parts of the City of Ife in the mid hours of Wednesday as armed men suspected to be of a rival group engaged in violent attacks.
While the cause of the attack is yet to be ascertained as of press time, sources at the scene however confirmed to our correspondent that a number of people heavily armed with various sorts of weapons stormed the streets and unleashing mayhem, leading to shopowners prematurely shutting down for the day and the roads desserted within minutes.
An unconfirmed source at the scene added that the incident which mostly affected Lagere, Sabo down to OAUTHC Phase 2 and some other parts of the City was said to had been in connection with an alleged killing of a person in an outsket farm of the city and who, according to the source was said to be an ally of the rampaging group.
Efforts to reach the Ife Area Police Commander proved abortive as calls put through to his line did not go through.
The incident of which no death was said to have been recorded  was coming up few hours after the conclusion of the celebrations of the famous, well attended Aje Festival in the ancient city which lasted for days.
It will be recalled that a similar incident broke out on the 8th of March, 2017 leading to loss of lives and destruction of properties worth millions of Naira.
City News Crime & Incidence
IFE CITY BLOG
Your Best Plug For Top-Notch Community News, City Infotainment And General Updates. Follow Us On Our Social Media Platforms To Stay Connected For Latest Updates And More.