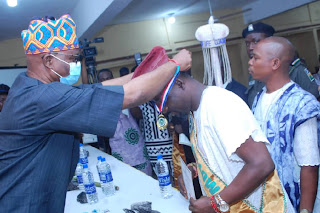 Comrade Moses Olafare, the Director of Media and Public Affairs to the Ooni of Ife, Ooni Adeyeye Enitan Ogunwusi, Ojaja II, was on Thursday inducted as a Fellow of the Fourth-Estate Professional Society(FPS); a professional body for reputable journalists.

The Induction ceremony and seminar which took place at the prominent Shubomi Balogun Conference Centre, University of Ibadan, Oyo State, included lectures through which professionals of the pen profession where charged to uphold the core ethics of journalism.

"Through news reportage, editorials and other media contents, we must seek to fill communication gaps with professionalism and mutual respect. 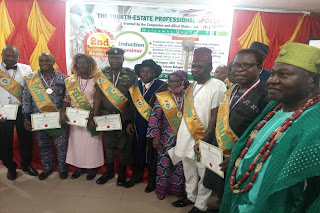 "Also, the issue of fake news must be combatted and defeated, as it is a dent on the prestigious journalism profession rape in Nigeria. If not dealt with promptly, it could lead to civil disobedience among other problems." The Ooni warned.

In his lecture titled; 'Sustaing professional practice in an economic challenging environment, Professor Victor Osaro Edo, of History Department, University of Ibadan, explained that journalists must adhere strictly to ethics of the profession as the challenges confronting them are obtainable in other professions.

"Government and other stakeholders must equally be responsible and responsive by creating a workers-friendly environment for professionals to thrive. That would motivate those who give their best to ensure that people are well informed." Prof. Osare Edo advised. 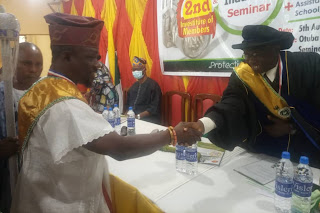 In the same vein, the Assistant Director Training, Radio Nigeria Training School, Lagos, Barrister Olowu Abiodun, while lecturing under the topic, 'Combating poverty in the media professional practice and there after, explained that more preference should be given to workers in media houses who are the real journalists.

"The real victims of poverty are the workers because media owners are either government or those we can refer to as big men. So more attention should be given to such people.

"I wish to recommend more forum for intellect discuss, provision of incentives and establishment of productive gatherings like an annual conference for Journalists. Also, there should be more financial literacy teachings including corporative approaches for our people to come together and achieve greatness." Barrister Abiodun said.

Celebrity Gists Gists From The House of Oduduwa Ife Icons People & Culture
IFE CITY BLOG
Stay With Us For Top-Notch Community Reports, City Infotainment And Breaking News From Across Borders. Follow Us On Social Media For More. For Your Adverts Placement And Publications, Please Call/WhatsApp: 08141665947 Or Send a Mail to [email protected]